« CANCER UPDATE | Main | NO SIGNS OF CANCER GROWTH AROUND EYES, BUT MORE TESTS AHEAD »

PRESSING FORWARD IN HIS STRENGTH 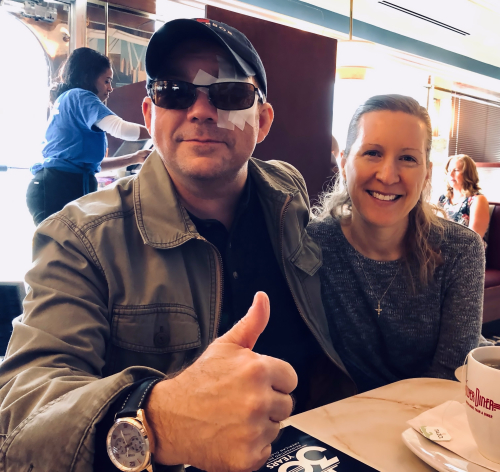 I would like to thank those who prayed for me as I underwent surgery this past Saturday.  Overall, the surgery went well.  The surgeon was able to easily obtain a biopsy from both masses in the lacrimal glands.  However, he had to spend some time removing a section from the orbicularis oculi muscle above the left eye.  This was the second time that a piece of muscle was removed from me (the first was my left leg’s Gracilis muscle).  If they keep on doing this, I may be able to get a permanent casting position on the Walking Dead, because money can be saved on me since I won’t need a zombie-chewed costume.

I must admit, however, despite the present use of my right eye, not being able to see out of both eyes is quite disconcerting.  In fact, I’m not sure what’s worse: having cancer or limited faculty of sight.  If I had to choose today, my initial preference would be to have complete eyesight.  The thought of not being able to see the alluring beauty of my wife each day would be a life of unending penal isolation and want; not only separated from her undying elegant countenance, but I’d also be left in an unquenchable deprived visual state.  But this is not the man Teresa married.

If both eyes were plucked out from this wretched shell and cancer had laid stricken throughout, she would expect me to fight and press forward to the end, as a Christian and husband must do!  But if eyes cannot lay upon the beauty that one fights for, then what does one do?  Earnestly seek God, because His love is better than life; a sanctuary for a dry soul that can only be satisfied by His richest of foods.

Even as I write this now, I sense the shadow of His wings, allowing me to cling to Him during this time.  For this truth I know – my strength comes from Him.

Clinical update: At this time, we’ve not yet received a pathological report to determine if the three masses are a metastasis or not.